Capotondo has been awarded as best Chianti Classico at “Radda nel bicchiere” competition. 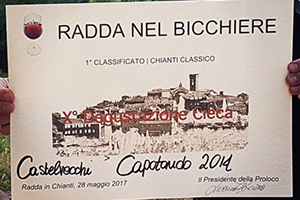 There are awards with a special taste: authenticity.

Premiata Fattoria di Castelvecchi prize has a great symbolic value for the place in which it’ established:

Radda in Chianti is the place where the Chianti Classico Black Rooster was founded in 1924, moreover it represents one of the 3 historic municipalities of Chianti Classico, already mentioned and set in the notice of the grand Duke of Tuscany, 1716: the first legal document in history that determines an area of wine production.

Capotondo, has been awarded as the best Chianti Classico at the 10th blind tasting at “Radda nel bicchiere”, important event of winetourism promotion in the heart of Chianti Classico.
A result that makes us even more proud, considering the high level of the wine producers attending the competition.
A prize that rewards the choices of “uncompromising” viticulture of Casa Paladin, expressed at the highest level between these hills of Tuscany, where Capotondo is produced by Sangiovese and Canaiolo grapes, selected with care.

To convince the jury, almost certainly was the character of Capotondo, with its harmony capable of expressing this territory and its history.
Capotondo is the most genuine interpretation of Chianti Classico in perfect balance between fragrance and softness, between fruit and structure.
A wine that seduces the connoisseurs and tells the passion for land of Casa Paladin.